This post isn’t about getting fanfic professionally published. Nor is it an attempt to disagree (or not) with authors such as George R. R. Martin who stand directly against fanfiction for various reasons. This isn’t about encouraging writers to plagiarise or teaching them how to file off the serial numbers on fanfic to publish it as original work[i].
It is about how the techniques required by fanfic can help writers develop their skills and become more thoughtful about their processes.

Fanfiction[ii] gets a lot of stick. Despite its lengthy history, for a long time fanfic was tucked away and never spoken of in polite company. While it’s never really been secret, over the past few years, it has been brought a little further into the light. Certain books[iii] have achieved success off the back of their fanfic beginnings. Publishers have been actively seeking out popular fanfic works to greater or lesser success.

But just because it has had light shone upon it, doesn’t mean people regard it any more highly than they used to[iv]. Talk to most people from outside the fanfic world and they tend to be a little bit:

“Real writers”, professional writers, create original worlds and characters from scratch. Their works are carefully and fully developed, and they consequently have a depth that’s impossible for a fanwork to achieve.

There’s no denying there are differences between “professional”, or original, writing and fanfic. They each have their own sets of standards and expectations – something that is acceptable for a fanfic would be frowned on in a traditionally published work; someone writing professionally is bound by a lot more rules and guidelines than someone writing fanfic; the author of an original work has to convince their audience to believe in and follow a brand new fictional world where the fanfic author has to reassure their audience that they can be trusted with already beloved characters and worlds and meet their expectations. They’re important differences…but that doesn’t mean fanfic isn’t real writing, or that it doesn’t involve useful skills and techniques that can be applied to professional (or other!) writing.

Critics would have it that pro writers are pro writers and fanficcers are fanficcers and never the twain shall meet. But there are plenty of traditionally published works that prove the twain have   met and they get along quite well, thanks. There are off-shoot series based on popular films and TV shows such as Star Wars and Stargate that are not called fanfic because they are officially licensed[vi].

Books like Wide Sargasso Sea, Pride and Prejudice and Zombies, and the Young Sherlock Holmes are described as derivative, or mash-ups, or parodies; “inspired by” or “set in the world of”… but are equally the kinds of books that could only be written by someone deeply familiar with the source material that inspired them.

Ignoring the legal and financial sides, what makes these books different to fanfic? Is it simply the fact that the original creators have authorised them? You don’t have to delve too deeply into ff.net or AO3 to find works that are equally just “variations on a theme” – stories that continue where canon left off or reset the entire story in a completely different world.

Like it or loathe it, the suggestion that such writing would involve neither skill nor creativity is patently incorrect.

A number of publishers and even authors employ ghostwriters or collaborators to continue a popular series. Tom Clancy’s splinter cell series, Ian Fleming’s James Bond novels, Robert Jordan’s Wheel of Time and many others have all been taken up by other writers. Such endeavours require the same skills as fanfiction: the writers need to immerse themselves in the original canon, to learn worlds and characters and write in a way that matches and is true to the original creators’ style and tone[vii]. In these situations, popular media judges the writers for their skill and their ability to “get it”.

Does anyone ask these writers whether they will ever write “for real” as fanfic writers often are when they are found out?

Possibly they do, but is the scornful tone quite so loud? What constitutes “real” writing? Where’s the line? 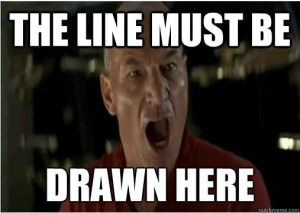 There is a post going around on Tumblr, written by someone who reads scripts for a living, reassuring fanfic writers about their talents… It is a good post, and as someone who works with stories for a living, I agree with much of the sentiment: there are some incredible storytellers in the fanfic world, and often fic ­– unconstrained by the rules and expectations of a money-making business –  bends genres and expectations in ways professionally published works don’t. (Or can’t?) Of course, some of these fanfic authors do actually write for a living, because writers of fanfic are just as varied as any other group of humans. They’re people. They come from all corners of life, and they’re all ages. They’re students and academics, scientists and librarians, business analysts and soldiers, artists and authors… So it shouldn’t be a surprise that so many of these writers know what they’re doing.

Another recent online comment declared outright that “fanfic isn’t like professional writing”. This was in response to a post aggressively criticising the presence of certain phrases/tropes/writing styles in fic. Others went on to point out that such negative phrasing (rather than gentle guidance) tended to put people off writing at all[viii]. Fanfic, they pointed out, was more often about writing for fun and not everyone writes it with the intention or desire to learn how to write better.

Fair enough. Writing should be fun…or at least enjoyable and/or satisfying[ix].

Some fanfics are badly written and/or thinly-veiled self-insertion stories written by sparkle-eyed daydreamers.

…So what? There are quite a lot of original works that could be described the same way.

Some people write for the same kinds of reasons and enjoyment as they might otherwise watch a film or read a book. No one asks them to work at those pastimes until they have them mastered.

Does writing anything have to be a training exercise? No… but it can be.

In fact, if you do want to learn how to write better and develop your skills, fanfiction is a pretty good way to start. Not the only way, granted. And maybe not everyone’s preferred way. And I don’t particularly advise ficcing your favourite author’s work if you know they are against the practice. But if you’re looking for writing exercises to develop your skills, using a pre-created world as a source or template seems as valid as other known exercises such as writing a scene from a photograph or using a song as a prompt. By learning how to explore, examine and develop someone else’s canon, you can often work out how they have pieced things together; the elements and themes and considerations that go into making a fictional world. And from there you can figure out how to go about creating your own…

Continued in Part B: How fanfic can help you write more professionally

[i] Some publishers accept and even encourage reworking fanfic but despite recent publishing deals it is more often frowned upon. It cuts so close to plagiarism that it can be a risky proposition and just changing the names is not enough. I once received a submission that was quite clearly a reworking of a Harry Potter fanfic; there wasn’t a single name or setting that was the same as the original, but it was still obvious.

[iii] You know the ones. Fifty Shades of Grey. The Mortal Instruments. A number of well-known authors began their writing careers in fanfiction. Some hide this fact, some are open about it. It’s surprising how many popular novels secretly began this way.

[iv] Fanfiction gets a lot of flak from all corners of the reading populace. Part of this is fan shaming, part of it is because of its reputation for being the originator of slash fiction and for being focused on erotica – even though, by definition, fanfiction is just that: a reimagining of an existing fiction by fans. Erotica and slash are just one aspect.

[v] One of the things often counted against fanfiction is the fact that a lot of the writing is amateur and often poorly executed. And some writers get outraged that people are “playing in their sandpits” or “misrepresenting” the characters they created. For actors who have portrayed certain characters it can undoubtedly be somewhat disconcerting to see “themselves” written into blushingly graphic anatomical situations.

[vi] Which is not quite the same thing as Amazon’s “Kindle Worlds”, which is licensed fanfiction.

[vii] This is also a fairly accurate rundown of how an editor approaches most edits. Suggestions and changes need to be made with the author’s voice and foundations in mind.

[viii] This holds for criticising any kind of writing, fanfic or otherwise.

[ix] Just covering my bases here for all the authors who feel writing is sometimes like squeezing blood from a stone and far removed from the notion of “fun”.